If you have ever visited Italy and had Italian cuisine, you may have noticed some unique differences. This month, we are here to explain some of these to you.

Deciphering pizza differences between Italian pizza and American pizza can be challenging. Pizza is a famous fast food worldwide. Children and adults alike love ordering a fresh pie on a weekend night. Italian immigrants brought this delicious dish to the United States. Service members returning home from World War II made the delectable cuisine take off all over the country.

First, we’ll look at some history behind the two dishes in each country. Then, we will explain the differences between the pizza found in Italy and the United States. Finally, we will talk about the impact of commercialization on Italian pizza and American pizza.

Learn the History Behind the Famous Dish in Italy and the U.S.A

Pizza isn’t something that just showed up in restaurant menus. People across the globe have been eating this delicious dish for centuries. “Pizza” originates from the Latin word for flatbread, “pinsa.” The Italian and American dishes have unique origins that make them stand out from each other. Here is the genesis behind both pies in each country:

According to locals, long before the cuisine that we know today, Italian pies were considered a peasant meal. This delectable dish originated in Naples, Italy, in the 16th century. In 1889, King Umberto I and his wife, Queen Margherita of Savoy, visited the country of Italy. While unamused with their normal French feasts, they decided to send away for locally-made pies. Ever since then, Italian pizza has become extraordinarily popular.

The American-style dish as we know it today originated in New York City. Gennaro Lombardi opened the doors to his restaurant in 1905 to considerable local success. Over the years, pizza serendipitously crept across the east coast into New Jersey and Connecticut.

How Do the Italian Pizza and American Pizza Differ?

Italian pizza and American pizza contain features that make them unique. Everything about the classic dish, from the crust to the toppings, fit each country. So let’s take a look at how Italian and American pie features differ:

There is a significant difference in crusts for both country’s dishes. Most Italian Pizzerias skillfully stretch out the dough to where it resembles a cracker with tomato sauce. It’s so thin and light that many people eat a whole pie by themselves. American Pizza crust comes in various styles including, New York Floppy Slices, Chicago deep-dish, Detroit pan, and more.

Because Americans have diverse tastebuds, pizzerias are required to offer an assortment of toppings and cheeses. When you order a plain pie, American pizza has much more cheese than Italian pies. In Italy, whole pies often get consumed on the go because they are very light and digestible. This reason is also why Italians tend to order their pies with only one topping.

Impact of Commercialization on Italian Pizza and American Pizza

The United States and Italy are the pioneers of large-scale cuisine. However, the commercialization of one is far influenced by the other. You can still find a traditional pizzeria in Italy covering a large area, but it’s rare in America. The reason why is because of the influence of commercialization.

Large pizza chain brands have taken over and made the dish more affordable for the ever-booming American population. This operation also has its demerits as the standard culture in the U.S.A has been discarded. History Today further explains the impact of commercialization in Italian and American pizza.

Mamma Maria’s Offers Delicious Pizza in and Around Salem, VA

If you’re in Salem, VA, and surrounding areas, come to Mamma Maria’s for some delicious pizza and Italian cuisine. Our menu contains all of the classic dishes that you will enjoy. We also offer our buffet perfect for large gatherings and family dinners. Enjoy our homemade gelato or “Italian ice cream” to put a bow on your dining experience with us. We take great pride in providing an authentic dining experience for all of our customers.

Since our inception, we have developed a solid reputation as Salem, VA’s best Italian restaurant. Residents throughout the commonwealth come to our restaurant for a night out with family and friends and parties. We pride ourselves on providing an exceptional dining service for you. We also offer on- and off-site catering for your next party. Contact us to learn more.

For great Italian cuisine, call Mamma Maria’s at (540) 389-2848, or email us. Follow us on Facebook for updates and new dishes we create. Stop in for a delicious meal and learn more about Italian pizza and American pizza. 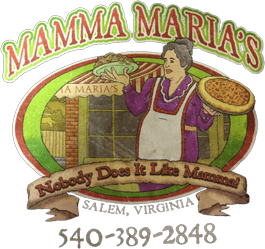